Bob and Rhonda celebrate their marriage. Photo: Rex Clutario at Misty Optics. AFTER five COVID-induced postponements of their wedding celebration,...

AFTER five COVID-induced postponements of their wedding celebration, Woolgoolga retirees Bob Breen and Rhonda Elliott-Breen celebrated their marriage via Zoom, surrounded by neighbours with 150 family and friends joining via Zoom on Saturday 25 September.

The couple married in September 2020 at their Woolgoolga home in the Plantations by Ingenia Lifestyle community with two witnesses, so that a very close friend could be part of the day before she passed.

Bisque InteriorsAdvertise with News of The Area today.

It’s worth it for your business.

However, the broader celebrations were delayed, until Bob and Rhonda declared, “Zoom it”.

Friends and family from Australia, USA, Papua New Guinea and England all Zoom-ed in to the reception held at the Plantations clubhouse.

Both Bob and Rhonda had been married previously and found themselves striking up a connection in Canberra in 2018 at a stage in their lives when they had both become single.

“I met Rhonda through a mutual connection at dinner one evening.

“She was visiting from Queensland and my initial thought was that it would be lovely to have a phone friend,” Bob said.

“Neither of us was looking for a new romantic relationship.

“But after our first meeting I had a clear thought, the unmistakable finger of God, that I should pursue her.

“So, I quickly made plans to visit friends at Mt Tamborine, near Rhonda’s home at Jimboomba.

“I rang her the next day, stating that by coincidence, I was visiting friends nearby and that I would love to pop over to see her for lunch − and that’s how it all started.”

Rhonda was initially hesitant of the courtship, having lost her husband, Richard, of 50 years only two years earlier after nursing him for five years.

“I never thought I’d find another beautiful man like my Richard, and I did hold back to start with, but Bob and I were meant to be,” she said.

“It was a match made in heaven, and I believe that Richard sent Bob and that this is what he would have wanted for me.”

Looking for a sea change and to downsize and declutter, the couple found themselves moving to Woolgoolga, for a new life together in July 2019 – the place they now call home. 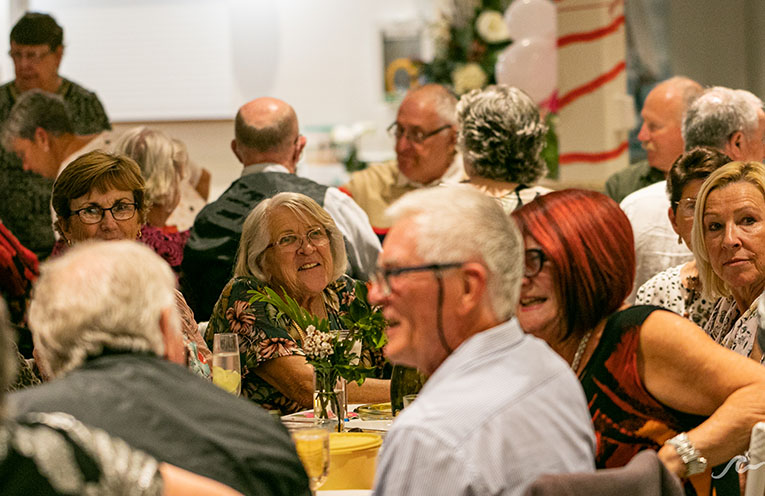 The wedding reception at Bob and Rhonda’s home in Woolgoolga.

This article has been aggregated from www.newsofthearea.com.au and they maybe/are the copyright owners of the same. If you are the Author/Copyright owner of this article and want us to remove the same then send an email to admin@vendors.wedding so that we can delete it immediately. We sincerely regret and apologies for any inconvenience caused to you due to the same. Though it is your decision but please take note that the link to your website and the article have been given above, within and on the bottom of the article.