The 2021 season at Scarborough Open Air Theatre began with a sell-out show by Stereophonics. Photo: Cuffe and Taylor.Playing their first gig in exactly 500 days, Kelly...

The 2021 season at Scarborough Open Air Theatre began with a sell-out show by Stereophonics. Photo: Cuffe and Taylor.

Playing their first gig in exactly 500 days, Kelly Jones and the boys delivered a hit-packed show that included such anthems as The Bartender and The Thief, Maybe Tomorrow, Dakota, Hurry Up And Wait, Handbags and Gladrags and Just Looking.

Among the 8,000 crowd was Rob and Sarah Hiscoe, from Pontefract, who got married earlier in the day and brought huge cheers from the crowd as they arrived for the show in full wedding attire.

“What better way to spend your wedding night than watching the Stereophonics in Scarborough ” said happy groom Rob. 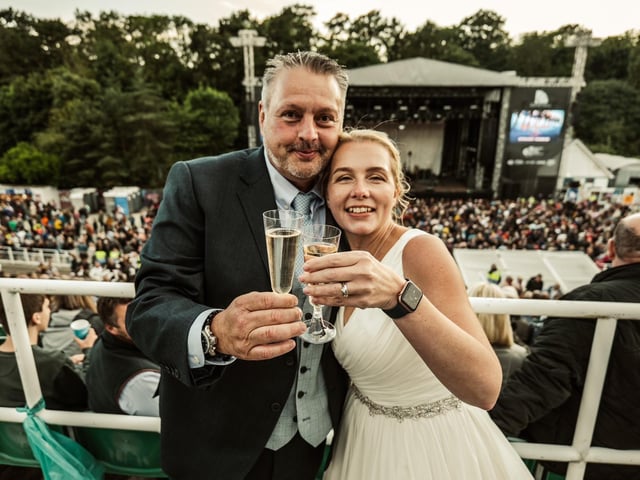 The new Mr and Mrs Hiscoe had planned to marry in Cyprus next week but Covid restrictions put a halt to that.

Instead, the couple celebrated at Scarborough Open Air Theatre after marrying in their hometown earlier in the day.

“I’ve been to see the Stereophonics about 20 times,” said Sarah. “We saw their last gig before lockdown and we booked to see them in Scarborough when it went on sale.

“When we realised we weren’t going to be able to go to Cyprus we booked the wedding for today and we get to celebrate with the Stereophonics!

The Stereophonics show was the first gig at the venue for almost two years and marks 500 days since the Welsh rockers last played a live show in front of a capacity crowd.

Peter Taylor of venue promoters Cuffe and Taylor said: “What a stunning return for live music at Scarborough Open Air Theatre. Stereophonics delivered a brilliant show, it was so great to welcome them back. I want to thank the whole team at the venue and such an amazing audience for making this a night to remember.

“And, of course, huge congratulations Rob and Sarah – we are delighted you decided to spend your very special day with us. All the very best for the future.

This article has been aggregated from thescarboroughnews.co.uk and they maybe/are the copyright owners of the same. If you are the Author/Copyright owner of this article and want us to remove the same then send an email to admin@vendors.wedding so that we can delete it immediately. We sincerely regret and apologies for any inconvenience caused to you due to the same. Though it is your decision but please take note that the link to your website and the article have been given above, within and on the bottom of the article.