Mumbai: After actors Vicky Kaushal and Katrina Kaif tied the knot last week in an extremely private wedding, now the groom`s cousin Dr Upasana Vohra and her husband Arunendra Kumar have shared a sneak peek into the rooms of the guests who were invited.

Taking to his YouTube channel, Arunendra posted a video in which he gave a room tour of the luxurious venue, Six Senses Fort Barwara in Rajasthan.

Praising the venue, they showed their balconies view and said that three days without a phone can be a good thing as the guests weren`t allowed to bring their phones to the venue because of privacy reasons. 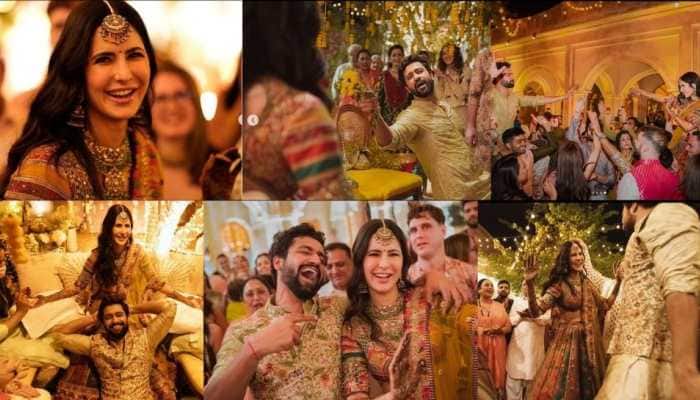 Apart from this, their room had a four-poster canopy bed with wooden decor having intricate carvings. Giving a glimpse of the bathroom, the couple revealed that the toilet seats cost Rs 6 lakhs and were completely motion-censored.

They then moved on to documenting the exterior areas of the fort-turned-hotel where the arrangements for meals were made.

Vicky and Katrina`s marriage event was a big-fat Punjabi wedding with people smiling and dancing all around. The love and fun they all had can be seen from the pictures that the couple has been sharing from the pre-wedding festivities.

Just today, the newlyweds treated fans with some beautiful pictures from their Mehendi ceremony which was full of love and lots of bhangra.

Vicky and Katrina will reportedly throw their wedding reception party for the film fraternity in the upcoming days and will resume work after concluding all wedding festivities.

As per reports, the newlyweds have already moved into their new Juhu house on Friday night.

This article has been aggregated from zeenews.india.com and they maybe/are the copyright owners of the same. If you are the Author/Copyright owner of this article and want us to remove the same then send an email to admin@vendors.wedding so that we can delete it immediately. We sincerely regret and apologies for any inconvenience caused to you due to the same. Though it is your decision but please take note that the link to your website and the article have been given above, within and on the bottom of the article.