Even among Hindu weddings, regional differences mean that a Rajasthani wedding differs from a Keralai wedding. Wedding customs and rituals, on the other hand, are similar because they represent India's uniqueness as well as the religion and ethnicity of the people involved in the wedding. Typically, the wedding has three sections: pre-marriage, main wedding, and post-marriage.

The pre-wedding includes a party, the night before the wedding, where the families of both side meet, dance and have a good time. A Pandit, who has chosen the wedding day based on the bride and groom's star signs, conducts a prayer with family members to grant the couple a happy marriage.

The following are some of the traditional wedding customs that contribute to the uniqueness of Indian weddings.

Indian weddings are usually three days long, including all ceremonies. Misri is the first of these rituals, which takes place a few days before the wedding day. The wedding couple shares prayers, flower garlands, and gold rings during this event. The groom's parents traditionally offer the bride a basket of gifts as well as misri (rock sugar), which symbolizes future sweetness. 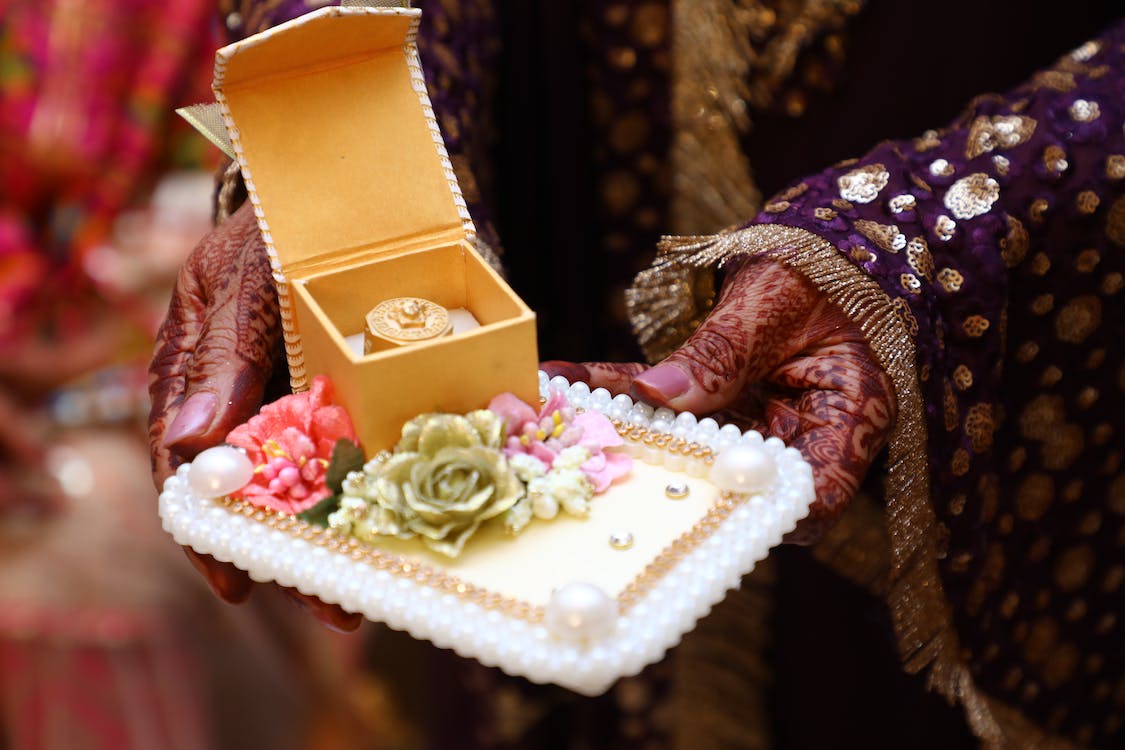 The Sangeet is the first of the various pre-wedding rituals that take place before Hindu wedding ceremonies. Sangeet may be performed separately or in conjunction with the Mehendi ceremony. The bride and groom's families (or just the women) gather for song and dance as part of the celebration. Unlike many other ceremonies, the sole purpose of Sangeet is to celebrate the couple's peace and joy. 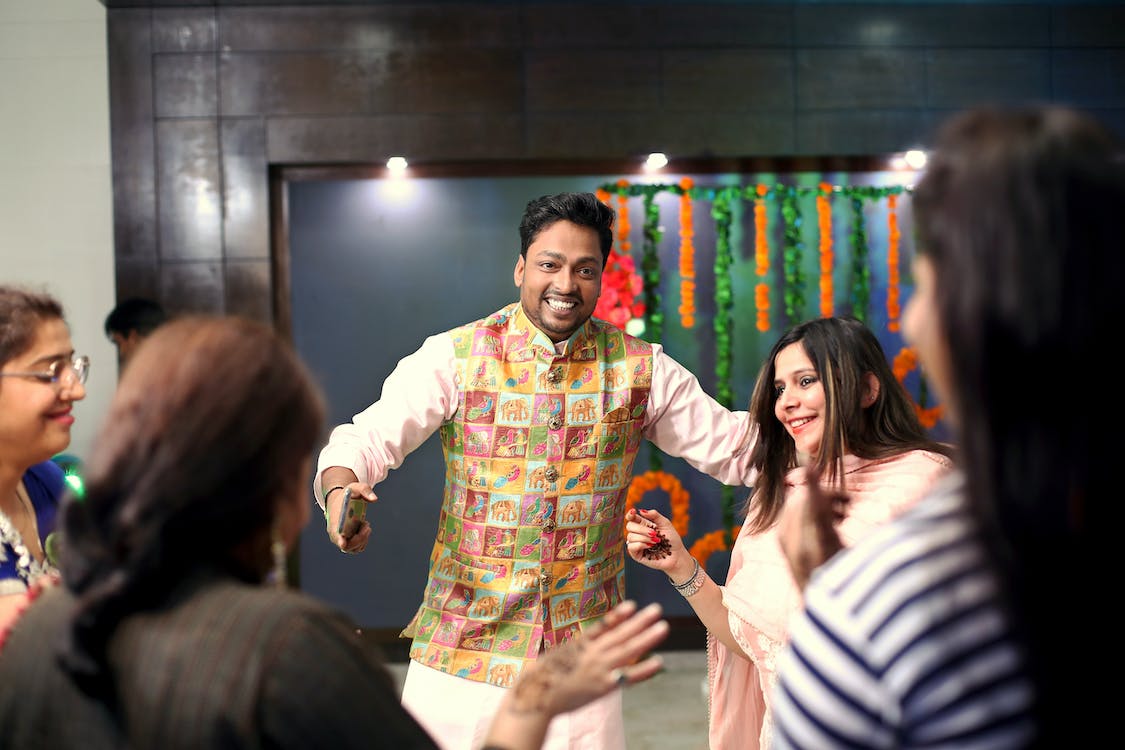 Just one day before the wedding, the Mehendi ceremony takes place. Only women are invited to this gathering, where mehndi is used to create pretty designs on their hands and feet which symbolize a strong connection between the husband and wife. The Mehendi ceremony is sometimes paired with Sagri, in which the groom's female family members present the bride with gifts and flowers. 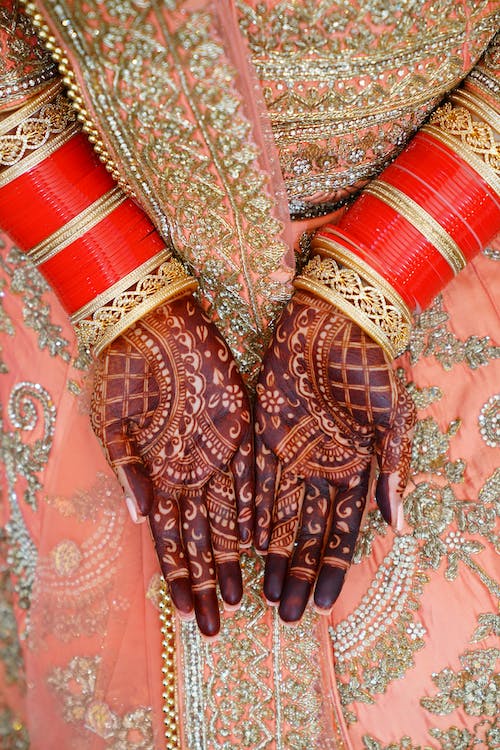 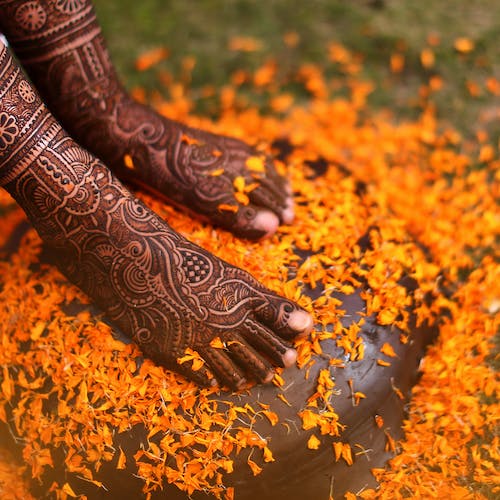 The Haldi ritual takes place on the morning of the wedding. Both sides of the family apply a mixture of oil, water, and turmeric to the bride and groom's skin and clothing in this tradition. The mixture is thought to bless the couple as well as moisturize and cool their skin before the wedding. 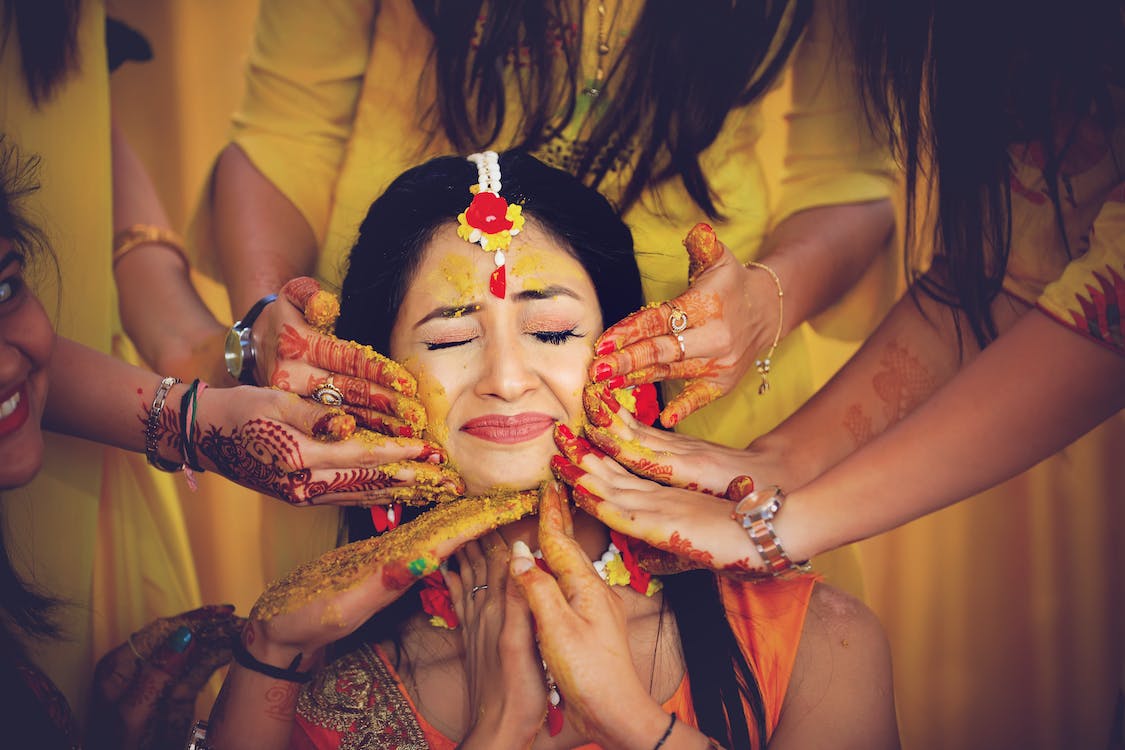 The ceremony is held under a Mandap, which is a four-pillared dome in traditional Indian weddings, Each pillar is thought to represent the couple's parents, whose love, blessings, and encouragement were instrumental in the wedding's success. Bright colors, flowers, and drapes are traditionally used to decorate the Mandap.

An Indian couple exchange vows in front of an Agni, a sacred fire that serves as a witness to the ceremony. While reciting the sacred Hindu vow of marriage, the bride and groom take seven steps around the fire. 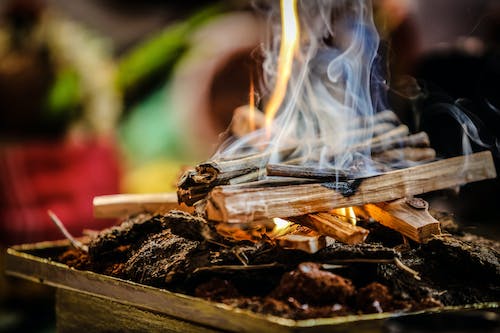 Rather than exchanging wedding rings, the groom ties a mangal sutra around the bride's neck in Hindu culture. The Mangalsultra necklace is made up of two gold pendants. The groom ties three knots in the necklace which symbolizes a close bond of 100 years. 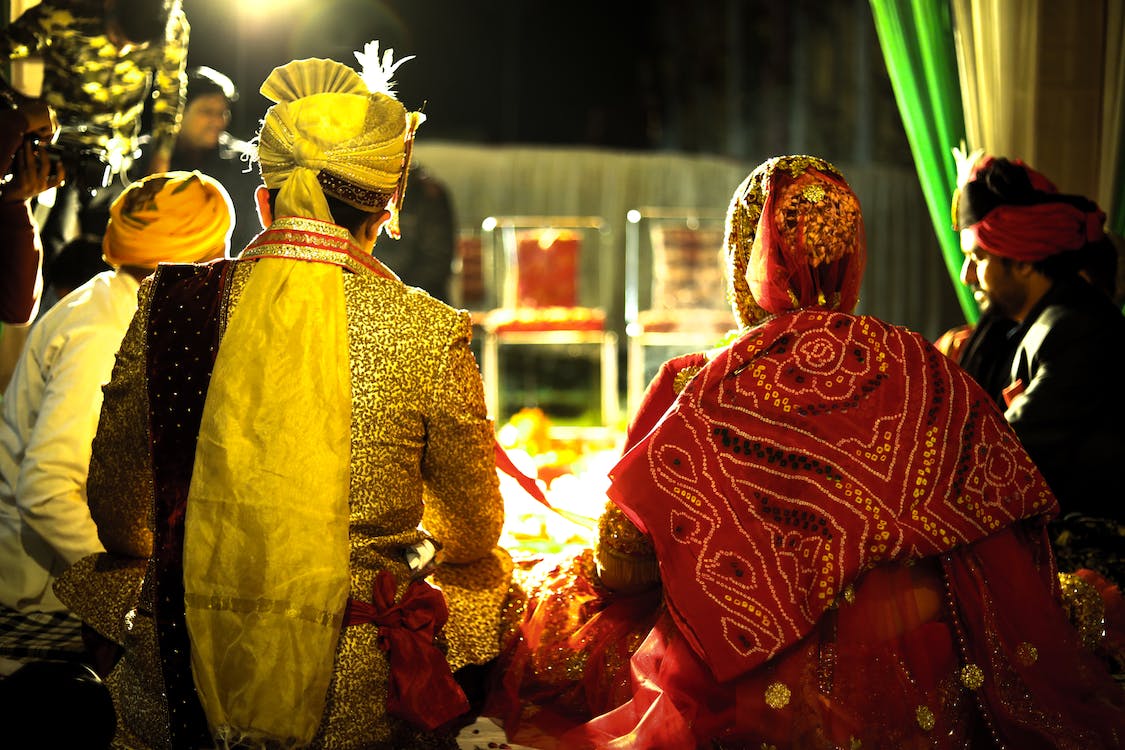 Indian wedding dresses are usually bright and colorful. This is because Hindu ceremonies include a brightly colored sari with gold embroidery, which symbolizes devotion, piety, and fertility. The bride will traditionally wear a Solah Shringar, a 16-piece outfit that includes make-up, jewelry, and clothing.

Each piece is designed to enhance the bride's natural beauty. The Mangtikka, a large jewel worn by the bride on her forehead and through a portion of her hair, is a prominent piece of the Solah Shringar.

For good luck, a bride may add a smidgeon of red kumkuma powder to her forehead. The bride's attire can differ depending on the area she hails from. The style of jewelry worn may also differ. The groom's outfit isn't quite as fancy.

The groom will wear a Sherwani and Mojari, a style of shoe that is frequently seen in Mughal art, at a traditional Hindu wedding. The majority of the women at the wedding will be dressed in a Sari or a Lehnga. 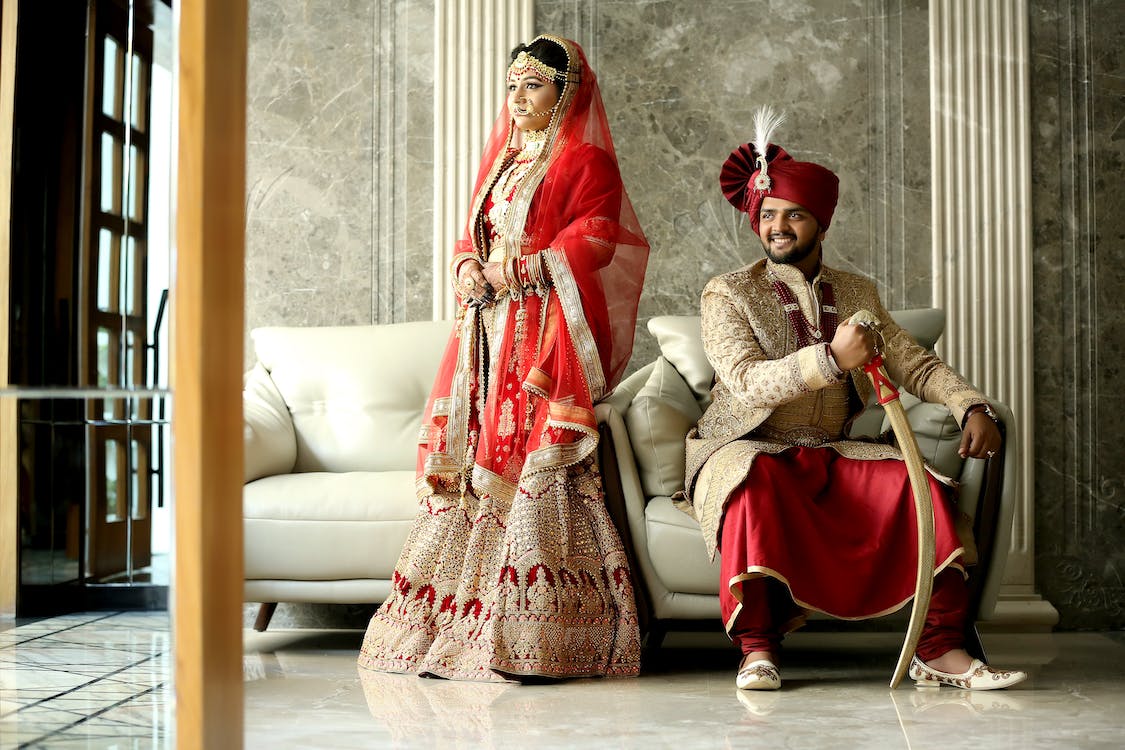 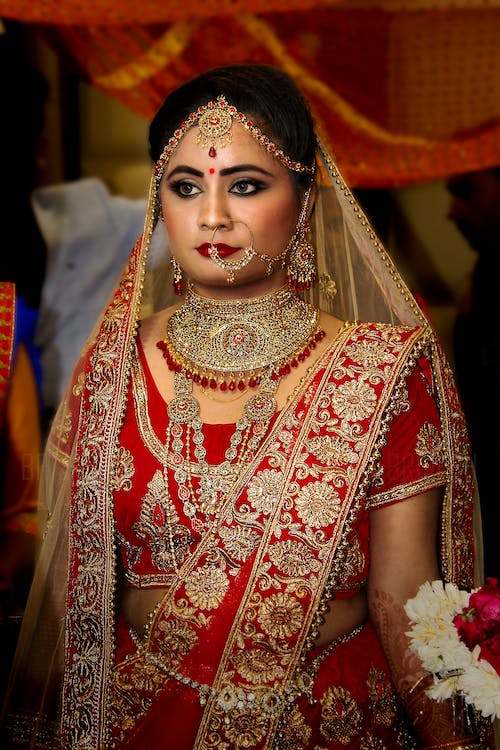