'Love Is Blind' star Natalie says she warned Shayne her answer would be 'no' at the altar, but the wedding happened anyway

Natalie and Shayne on their wedding day.Netflix"Love Is Blind" cast member Natalie Lee spoke with the LA Times about her wedding day on the show.Natalie said "I don't"...

A woman wearing a white strapless dress a veil stands in front of a man in a navy tuxedo at an altar.

Natalie and Shayne on their wedding day.Netflix

"Love Is Blind" cast member Natalie Lee spoke with the LA Times about her wedding day on the show.

Natalie said "I don't" after her fiancé, Shayne, had already said "I do."

She gave him a heads up her answer would be no, but she thinks he was hoping she'd change her mind.

While the 29-year-old consultant's statement of "I don't" came as a surprise to the audience, and seemingly to Shayne, 32, himself, Natalie now says she had given him advance notice of her plan.

"I did give Shayne the heads-up I was saying no, and he was very aware that that was gonna be my response," Natalie told the Los Angeles Times in a new interview. "I think in his head he was hoping that it might change, that I would change my mind going down the aisle, but I was very transparent it was gonna be a no."

The lead-up to Natalie and Shayne's wedding day showed them both grappling with the aftermath of a big fight. The night before the wedding, off-camera, the couple had gotten into an argument. It was later revealed by Natalie that the real-estate agent had told her that he "hated" her and she was "the worst thing to ever happen to him."

At the altar, Shayne was asked by the officiant for his answer first.

"I do, a thousand times over," Shayne said to Natalie. "You're my best friend and there was no one else I'd rather do this with in my entire life."

A woman in a strapless wedding dress with long, curled hair and a taller man wearing a navy blue tuxedo. 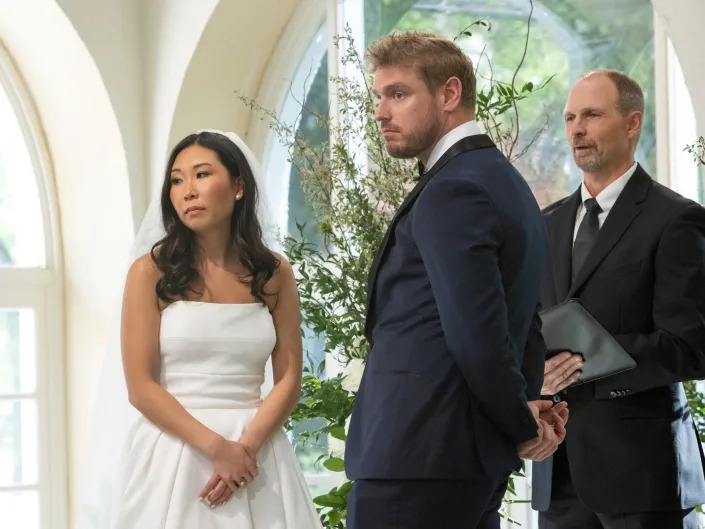 Then it was Natalie's turn.

"I'm so glad that we've shared this journey together. I think we've grown a lot as two people who have fallen in love. I know I've grown a lot because of you," she said, before dropping the hammer. "But I don't. I'm so sorry. "

As Shayne stood there, seemingly in shock, Natalie dropped her voice to a whisper so only he (and the mic) could hear.

"I'm really sorry Shayne," she said. "I still love you. And you're still my best friend, but we have really big issues to sort through."

Natalie left the wedding hall first, and Shayne followed shortly after. The two had an argument outside, still carried over from the fight the night before. Later, away from her ex, Natalie told the cameras that she would have said "yes" if it wasn't for the fight they had the night before.

Natalie says the Netflix team didn't 'force' anyone down the aisle, but by the time she made up her mind there were people arriving at the wedding 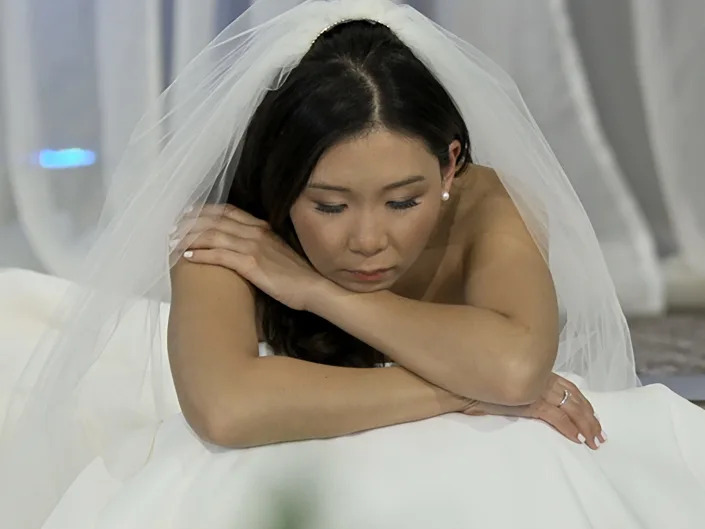 Natalie on "Love Is Blind."Netflix

Speaking with the LA Times, Natalie said the Netflix production team didn't "force" them to go through with a full wedding.

"Why we decided to go down the [aisle] and make that decision — our friends and family all flew in for the wedding and, so, by the time I really made the choice to say no, people are just showing up to my wedding and so you just feel like, OK, I've got to go down and make the decision," she said.

Natalie also spoke about how she and Shayne tried to continue dating after their failed wedding day and once the filming period for the show was over. She said his "instances of gaslighting continued" to happen when they disagreed.

For more on how the couple's relationship resolved, read Insider's story here about Shayne's Instagram tribute to Natalie and his "remorse" for his actions.

Read the original article on Insider

This article has been aggregated from news.yahoo.com and they maybe/are the copyright owners of the same. If you are the Author/Copyright owner of this article and want us to remove the same then send an email to admin@vendors.wedding so that we can delete it immediately. We sincerely regret and apologies for any inconvenience caused to you due to the same. Though it is your decision but please take note that the link to your website and the article have been given above, within and on the bottom of the article.